In Indian wilderness and countryside 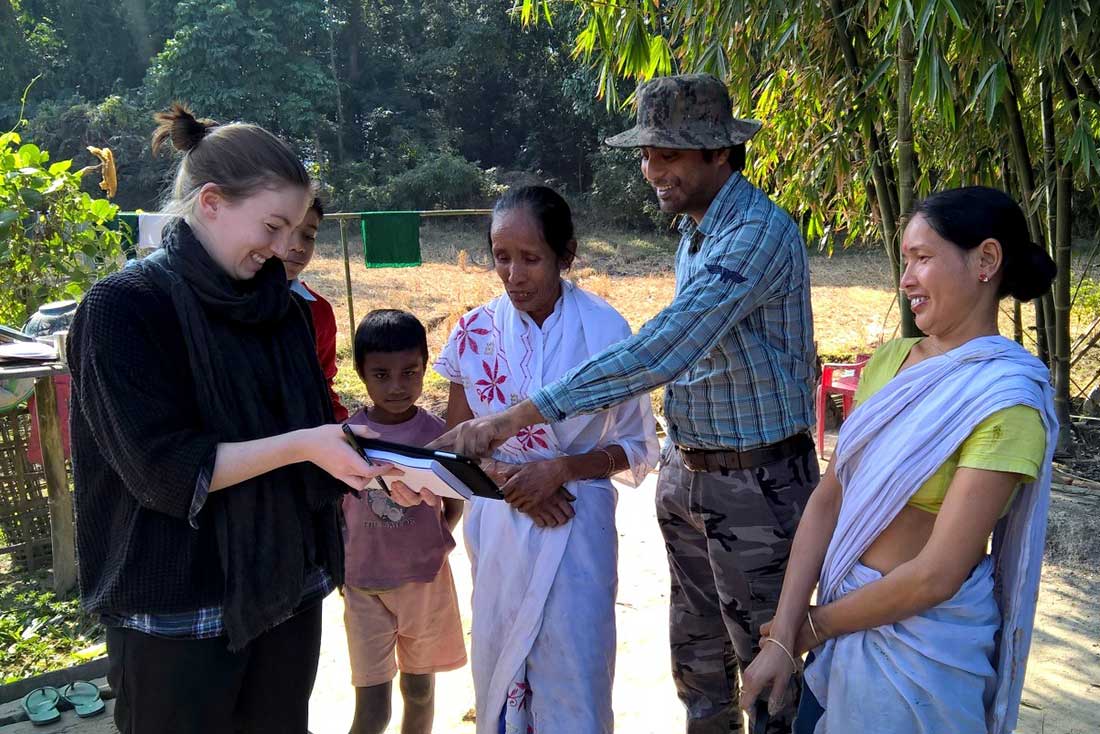 In Indian wilderness and countryside

More than 24 hours after leaving Edinburgh, I finally touched down in Guwahati airport and embarked on the 5 hour drive to my final destination. I travelled to India to conduct research into the understanding of lameness in domestic cattle, being farmed in the rural villages of Kaziranga. On arrival I was greeted by The Corbett Foundation, a wildlife conservation organization with branches in Corbett, Kutch, Kanha, Bandhavgarh, and Kaziranga. During my time working with this group of people I have become aware of the extensive work that The Corbett Foundation does in Kaziranga, and the intense challenges that they face.

A prime example of this came on the evening of my arrival. After my first cup of Assamese tea (which would be the first of very, very many) we set off for a local village lying close to the boundary of the national park, in the ‘buffer zone’. We were there to treat a bullock owned by a local farmer, which had been mauled by a tiger. Fortunately for this bullock, and perhaps even more fortunately for the farmer, he survived the attack and was left with two treatable puncture wounds to his throat. Unfortunately it soon became apparent that the rest of the village had not been so lucky, with reports of goats, calves and even pigs being snatched by the same tiger. This was to be my first example, in a long line of many, in which these human animal conflicts pose huge challenges for the work of The Corbett Foundation. In a community where people rely incredibly heavily on livestock for their livelihoods, it is an understandable reaction to retaliate against wild animals which threaten their crops and livestock. Hence the foundation works simultaneously to; conserve the national park and its wild inhabitants, improve the lives if the local people and most challengingly to engage and motivate these people in the conservation efforts.

In this instance the foundation was providing free veterinary attention to any livestock victim to these attacks, courtesy of Dr Naveen Pandey, the foundation’s Deputy Director and Veterinary Advisor in Kaziranga. Later on in my visit I became aware of another project, initiated in November 2014, which has also gone a long way in easing these loses. This initiative involves gifting pairs of piglets to a number of rural families, in particular those families who had lost livestock to tiger or leopard attacks. Additionally, these farmers were given training in the care of these piglets as well as worming supplies, giving the beneficiaries a chance to breed or sell the grown pigs. Thus these families were provided with the skills and tools to generate a new source of sustainable income. Substantial time is also dedicated to dealing with the challenges posed by elephants, who often venture outside out of the park boundaries. It is an almost nightly occurrence for elephants to wander away from the park, leaving trails of enormous footprints strewn across the paddy fields. These animals tempted by the grain stores and crops in the neighbouring villages, raid homes and buildings and in the process often destroy these structures and injure their inhabitants. During my stay we were even called to treat a domestic elephant which had suffered an attacked by a wild elephant. This clearly demonstrated the many varied forms in which these conflicts manifest themselves in the buffer zones. By installing watch towers and educating local people, the Corbett foundation is supporting the local communities in managing this threat and enabling them to effectively drive the elephants back to the park before any damage can be done. Thus the elephants return to the park unharmed and the village grain stores remain intact, and this potential source of conflict is resolved (at least until the next night!). The use of camera traps is also providing a vital insight into the behaviour of these elephants, and lays the foundation for developing future control strategies. It is efforts such as these which can help to both neutralize the human-animal conflicts in these buffer zones as well as vastly improve the lives of the local people in the villages around the protected area in Kaziranga.

During the first week of my stay I visited a local village in which the Corbett foundation was running an education project for the women living there, for me this was a key demonstration of the outreach work being carried out in these local communities. For fifteen days a group of over twenty women congregated in the village, learning how to expand their already impressive skills in garment making. They learnt how to produce products marketable to the tourists who flock to Kaziranga. New looms were also gifted to these villages, providing the tools necessary to produce these new, saleable goods. Not only does this initiative provide local people with the skills to improve their incomes, vitally it acts to empower the women with in these communities, fostering increased confidence and involving them in the wider activities of marketing and selling their goods. This project was one in a long line of such initiatives, including the continued financial support of six gifted and motivated college students, and even the gifting of honey-producing bees to local people. The hugely positive impact of this continued education and support can be clearly seen in these communities.
In just a few weeks it would be impossible to observe all of the work undertaken by the Corbett foundation here in Kaziranga, let alone to describe it in so few words. Ranging from community outreach programmes, to the extensive wildlife rescue and rehabilitation work carried out by Manoj Gogoi, the foundations aptly named ‘wildlife warrior’. This organization is approaching the challenge of conservation in Kaziranga from many different angles, and from what I have observed, it is working.