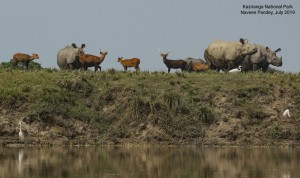 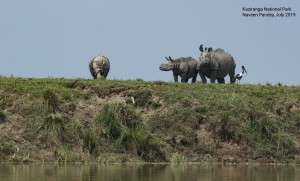 As the riverine patrol speedboat made a sharp turn through the Mori Difulu river after nearly 30 minutes of the ride, I got the first full view of much-talked highland built in the last couple of years in the Kaziranga National Park (KNP). More than 30 highlands have been added to the existing elevated structures inside the park so that the wild animals could take safe refuge during peak flood seasons. I would have called them mounds (or high land and not a highland), for ‘highland’, etymologically, is in parlance for ranges of low mountains. Nevertheless, calling these structures highlands doesn’t take away the service they lend to the wild fauna.

Ecological pundits will love to dissect the whole notion of building such mounds in a reserve. They would rightfully question the ecological sense of making such structures. The raising of eyebrows would be acute given the fact that Kaziranga is a flood plain and it has evolved amidst a cycle of floods, erosion and changed river course over thousands of years. One would also wonder what difference if any, such mounds make on population dynamics and conservation of certain species over a long period of time. The locations of such mounds, often not far away from the southern border of the park meandering the NH 37, in the view of the vulnerability of certain species for poaching could be delved into. Some would argue about these structures for being ecologically ‘inert’. Some foresee changes in the stream and flow of incoming floodwater precipitating grave hydrological changes.

We have been hearing various opinions and forecasts from a wide spectrum of people, within and beyond conservation circles, with all their good intent and concern. A trip to some of these mounds built in the ‘good faith’ would present a better insight and when such insight is clubbed with the various issues both inside and outside the park, these structures speak volumes about their relevance and roles.

As our speedboat halted more than 300 meters away from the mounds, so as not to disturb the animals thereon, waves of the water current and the ocean-like panoramic view of floodwater all around gave a different perspective of the flood than what I had created all along when viewed either from the affected villages or the highway. There were more than 80 animals going about their daily routine on the two high lands which stood as giant rocks in the middle of the largest temporary freshwater accumulation I had ever seen. One-horned rhinoceros, Rhinoceros unicornis, which are dubbed as ‘not-so-social’ species, were sharing the flat top surface of the mounds as well as the slant edges leading to the floodwater with over 80 other individuals of either their own clan or a different species when I happened to peep into their most stressful time of the year.

Over three dozen wild water buffalo, Bubalus arnee, turned their heads up, stopping their munching of the short grasses on the high land pro tem, pondering over unexpected intruders disturbing their safe retreat. Hold on, I said ‘grazing’. Yes, the buffaloes were grazing and so were the rhinos. You would have imagined the top surface of recently built highland to be devoid of grasses and other life forms only to be dubbed as ‘inert’. Then we need to take a fresh look. Grasses of various varieties have established themselves much before they were needed. You can think of the wind, birds, insects, water, ruminants and many other factors which might have acted collectively for an accelerated establishment of various layers of grasses. Grass seeds embedded in the soil also would have aided in the process. A black-necked stork, Ephippiorhynchus asiaticus, strolled around raising its curvaceous neck as if claiming its territory. Mynas and egrets kept themselves occupied feasting on the insects from ears and nostrils of rhinos. Over a dozen rhinos were nursing their calves and it was obvious that such mothers would have preferred a sojourn at the high land. While nursing mothers grazed cautiously, guarding their young ones, over a dozen of them were seen carelessly wallowing at the foot of the mounds, displaying horns of various sizes, all directed to the heavenly blue sky. Some of the male hog deer, Axis porcinus, proudly displayed their shining antlers and darker coat as if titillating you to frame them in your lens. Females of the eastern swamp deer, Rucervus duvaucelii ranjitsinhi, paler than their male companions, stood motionless – looking at nothing – displaying their long and slender neck. Some of the rhinos and buffaloes had descended down to the floodwater to feed on the submerged vegetation. In all practical senses, a micro-ecosystem establishing itself around a natural phenomenon -the flood – showed its prowess and instinct.

While one would argue that a man-made structure of this proportion is unwarranted in a natural forest, a counter-argument of the biggest man-made hurdle in the form of NH 37, impeding the free movement of thousands of animals, is not far to find. Most of the so-called wildlife management globally (and more so in India) arises today because of the anthropogenic activities. The wild heritage of the KNP has evolved over thousands of years of man-free environment. Men came much later.

The fear of altering the flow of water due to such giant structures seems unfounded given the fact that these mounds are like dots of ink on hundreds of sq km of the park area. They are not substantially giant (the biggest one measures 200 m X 50 m X 5 m) when looked in relation to the total surface area of the park. Wouldn’t the south-centric locations of these high lands act as a temporary stopover for many of the animals to catch a breath before they restart exhausting swim? Didn’t our revered Salim Ali Saab wrote in visitor’s notebook of KNP after an aerial survey more than five decades ago that the southern part of the park would hold more animals due to higher number of wetlands (heels)? Someone in the community quipped that the number of the rhinos crossing the highway this year was substantially lower than the previous years and the high lands were attributed for the same. Many forest guards echoed the same sentiments. I would refrain my imagination from stretching that far. It would be premature to establish such an association. People would say that only time would tell if the high lands built within the park deliver an ecological function. I doubt if time will ever tell us. Many of the actions taken in the name of wildlife management have never told us if they were ecologically sound actions. The annual burning of the grasses inside the park is one such glaring example. In all likelihood time will not tell us or we may not be there when the time will yearn to express itself. What I could see, as I looked at the high lands on a bright and hot day, a very clear use pattern, good intent, and an ecological micro-habitat building up. We must not forget that opinions of ecological pundits will not be based on scientific facts and data in the case of high lands. It will be just their opinion unless a thorough scientific study is conducted which seems the least likely thing to happen.

There is a reason to write this piece. The people involved in deciding and implementing such projects should know that they have done a good job unless proven wrong. These structures would also restore some faith in the forest department for its seriousness to protect the wild. Mind you, this story is only from one side of the high land as we didn’t make a full circle. A complete picture would be great and epic!

(P.S. – Written sitting at the feet of a life-size statue of one-horned rhinoceros at Guwahati airport while my flight has been announced to be late. Long live the rhino!)