Top Indian conservationists sent an SOS appeal to the Minister of Environment, Forest and Climate Change to protect Sanjay-Dubri Tiger Reserve by realigning the railway line so as to bypass this important tiger reserve and ensure the ecological and conservation integrity of this landscape.

(Copy of the letter sent to the MoEFCC)

Sanjay-Dubri Tiger Reserve (SDTR) is situated in Sidhi district of Madhya Pradesh and spread over an area of 1674.511 sq.km. This includes the Sanjay National Park and Dubri Wildlife Sanctuary as the core or critical tiger habitat (812.581 sq.km.) and the forested areas of Sidhi and Shahdol districts as the buffer zone (861.930 sq.km.). SDTR is connected through forest corridors in Shahdol district with Bandhavgarh Tiger Reserve to the west and borders the Guru Ghasidas National Park in Chhattisgarh to the south. Bandhavgarh-SDTR-Guru Ghasidas landscape together constitutes 3,607 sq.km. and harbours 141 (126-156) tigers[1].  This landscape is also connected with Palamau Tiger Reserve in Jharkhand and has the potential to accommodate the increasing tiger population of Central India. Scientific investigation has established that the tigers from Central India have high genetic diversity[2] which is mainly due to the functionality of the existing wildlife corridors. The National Tiger Conservation Authority (NTCA) and the Wildlife Institute of India (WII) also have highlighted the importance of this landscape in the ‘All India Tiger Estimation 2018’ report. Also, this is the only area to the north of River Narmada where gaur, India’s largest bovine, occurs.

Current issue: The expansion (doubling and electrification) of Katni-Singrauli railway line that passes through the ‘critical tiger habitat‘ of SDTR

The 27.5 km stretch of existing railway line connecting Katni to Singrauli in Madhya Pradesh passes through the 67-ha area of ‘critical tiger habitat’ of Sanjay-Dubri Tiger Reserve and the 5.3 ha of dense forest areas of Sidhi district adjoining SDTR. Before entering the SDTR, the railway line already passes through the identified wildlife corridor in Shahdol district, between Bandhavgarh and Sanjay-Dubri tiger reserves, that has high presence of tiger, leopard, striped hyena, sloth bear, Asiatic wild cat, jungle cat, sambar, spotted deer, and many other species of mammals. In the recent past, wild elephants have traversed to Bandhavgarh-Sanjay-Dubri Landscape and have established a few smaller populations in the corridor and both these tiger reserves.

The moderate amount of rail traffic on this existing route has already claimed life of a tigress from SDTR in April 2022 due to an accident while crossing the rail tracks. The orphaned cubs of this tigress now face an uncertain future due to this unfortunate incident. There are 38 documented deaths (and many unrecorded) of wild animals along this route during 2010-2020.  Between January to December 2020, the presence of tigers and leopards have been recorded 315 times in Dubri and Bastua ranges of SDTR. The presence of tigers and elephants have been documented on both sides of the existing track in the corridor indicating crossing over of the tracks by India’s National Animal and National Heritage Animal, respectively. Therefore, the plan to double and electrify this existing railway line will result in an increase in speed and frequency of the trains and is likely to prove even more detrimental for the wild animals of this landscape. This will also require the cutting of 14,187 trees along this stretch and can cause permanent barrier for the wild animals.

The proposed expansion (doubling and electrification) of this railway line would not only split the SDTR landscape but disconnect all the above-mentioned conservation areas from each other, and may slaughter wild animals thus an impediment for the long-term conservation of tiger, elephant and many other species.

We must plan linear infrastructure development in a way that does not undermine our wildlife conservation: with minimal effort and expense the two can be made compatible. Habitat connectivity is paramount for long-term conservation of tiger and elephant in the region and linear infrastructure projects such as the proposed expansion of Katni-Singrauli railway line must be planned appropriately to avoid comprising this. It has been suggested that the proposed expansion (doubling) and electrification of Katni-Singrauli railway line that passes through the ‘critical tiger habitat’ of Sanjay-Dubri Tiger Reserve and identified wildlife corridor of North Shahdol Forest Division, Madhya Pradesh, should be diverted so as to bypass this important tiger reserve and ensure the ecological and conservation integrity of this landscape. The existing Katni-Singrauli railway has already caused many wildlife mortalities and is becoming a serious conservation issue. The conservationists who have signed this letter have expressed dismay about the proposed expansion (doubling) and electrification of this line through a critical tiger habitat. The letter states, “In our assessment this proposed expansion (doubling) and electrification of the present line would bisect a Tiger Reserve and a crucial forest corridor which will be highly detrimental to tiger conservation efforts, and hence must be prevented. We request you to kindly take up this conservation issue with the Indian Railways and request them to realign the route so that the upgradation can occur outside of SDTR (core and buffer) and so avoid damaging this precious landscape.”

A map has been provided depicting the Bandhavgarh-Sanjay-Dubri Landscape having tiger, elephant and other wildlife presence, with the existing alignment of the Katni-Singrauli railway line, as also the alternate route recommended, which would avoid this destruction and damage.

Given below are few links to the media coverage on this issue: 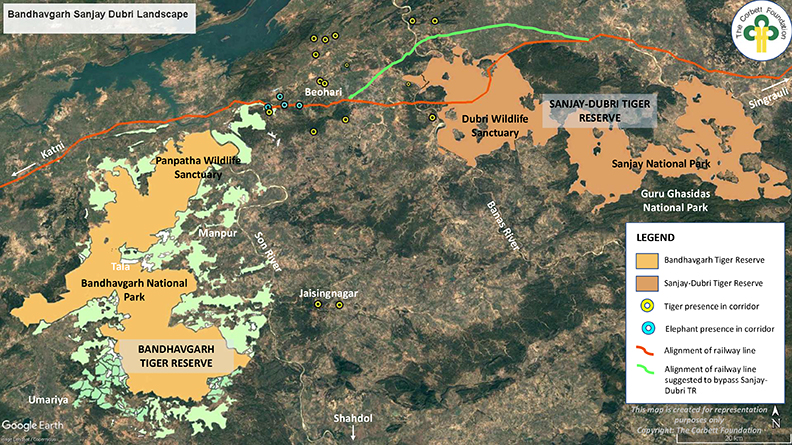